The Gathering of Pilgrims has come to a rousing conclusion with many a tearful farewell and promises to keep in touch. This blog will hopefully allow me to maintain some connections because I am actually pretty terrible at writing emails reliably. Letters, however, are another story and I can (and will) write those on the reg for some special Roses. Maybe even call once in a while too.

Well, I’ve been in lovely Ireland for approximately three hours now and the rain has yet to stop. Oh sure, it might slow down for a bit, maybe even suspend itself mid-drop to give the illusion of stopping, but this lovely country is either blessed or cursed by the machinations of the Rain God(s). Through the constant gray mist and perpetual showers, I have seen some rather green (and soaked) fields and interesting (yet soaked) architecture. Just on my block (Quay Street), I can see the steeples of at least four churches. And we’re talkin’ steeples here, mind, not the jibber jabber us Americans are used to – these are churches!

I’ve shacked up in the Four Courts Hostel now for the next two nights: one to recover from jet lag and excessive airplane travel and one to play tourist in the city of Dublin itself. After all, I want to look inside all of those steeples I can glimpse here and there through the downpour. It’s a lovely city, Dublin, and I really do look forward to exploring it, camera in tow, Guinness on draft.

Now then, I need to sleep and recuperate. I am a very tired monkey, after all. Cheers for now.

Tonight at the Gathering of Pilgrims, to round out the night, they showed a film to us about one man’s journey to complete the Camino. This man, Phil, was diagnosed with cancer and, per his doctors, will more than likely perish from this. I will admit that heart strings were pulled and tears were shed as I watched this short film. It was, simply, beautiful.

The film (which you can find here and on Facebook) was partly brought into fruition through the machinations of one of my fellow hospitaleras. It was actually shown at the SXSW festival earlier this year for you Austin types. My new acquaintance is the one on the far left; the director, who spoke about her film, is on the far right.

This film, Phil’s Camino, tells the very moving tale about a man destined to die yet is determined to finish his walk to Santiago. I really cannot express enough how beautiful this is to me. My mother had breast cancer (yet she beat the ever living shit out of it) so this film really hit home for me. Perhaps it was the wine, more than likely the heart strings being tugged, but this was the first film in a very long time to make me shed some saline. It is moving to watch his family and friends support his decision to walk, and very possibly die, on Camino.

Even in his finite time on the Earth, Phil seizes the day and strides forth, walking about the Camino as he fulfills his pledge even as cancer ravages his body. This documentary film showcases one of the many reasons people take to Camino and how that affects them and their loved ones back home. It is very well done, and the fact that the crew were in tow available for questioning made it even more endearing.

Through tears and broken voice, I hugged the director and her staff, thanking them for their incredible film and the potential impact it would have on future (and past) pilgrims. Yes, my mother survived the cancer, but what family isn’t touched by this horrendous decay? In Phil’s Camino, they brought life to death and made a memorable film for people to enjoy, or rather, take heed.

Go. Go forth and seize that day. Take to Camino, take to the road, and seize whatever day you’ve set aside for yourself. There is no time like the present, so it goes, and you never know when the Reaper comes. In that regard, go. Just go.

If you can spare a few bucks, please donate to this film and get the message out. It’s a worthy investment, a beautiful tale, and something worth spreading.

After a final night of schmoozing and drinking with the family, I boarded my first plane at approximately 6AM to begin the next chapter in my wandering lifestyle. My heart was heavy for I was leaving a great many things behind me – the sort of things a man doesn’t want to let go of – but my journey had to begin with this first step.

Two flights and a train ride later, here I am in Illinois at the Our Lady of the Snows chapel, ready to begin some hospitalero training courtesy of the American Pilgrims on the Camino. Already I’ve met a smattering of delightful folks I’m eager to spend the week with – seems like plenty of stories to be heard and shared. It has been a hell of a day and I’m quite an exhausted monkey, but I felt the need to share my thoughts (and packing list) before I became too embroiled in the week’s upcoming events.

Without further ado, let us go over The Packing List.

The bag pictured to the left holds all of my gear for the next few months (excluding the things I’ll be wearing day-to-day). It’s a nice bag, an REI model in the M/L range my brother was kind enough to let me borrow. The rain cover was a bit dull so I spruced it up with a positive message: To the ends of the Earth. Because, really, this bag is going places.

In all, I am carrying the following and justifying them thusly:

And that’s it. Everything, excluding the water, comes out to approximately 11 pounds. A good rule of thumb for long distance hiking is to carry about 10% of your weight max. Me being a fatass, that number would be closer to 17 pounds; however, my being a badass ensures this number is far lower and easier to carry. Trust me – you don’t need most things you think you might need when you’re out and about. As my brother said, “Ounces equal poundses.” You have to carry every last ounce so be mindful of that when packing.

After months of planning and prepping, hell, it is difficult to believe the day has finally arrived. Will some days suck? Absolutely. Will my fatbody protest in impotent rage? Of course. Will the experience be worth it? Damn right.

Now then, I am off to find some grub that isn’t coffee, shave my pathetic neckbeard, and hopefully get myself a nap. Until next time, comrades.

The city of dukes, nestled amongst the Sandia Mountains; ah, my breast beats for it. I’m currently being your stereotypical blogger: sitting outside a Starbucks, overpriced coffee in hand, tapping away on free Wi-Fi, and without a single concern in the world. But let me explain as to how I came about being in this delightful relic of Spanish imperialism.

I  come from a very large family and several of my siblings are already married and with child – bravo to them! It is for this reason then that I traversed the four hours from my home to come spend a few hours with the latest addition to our clan: a little niece! 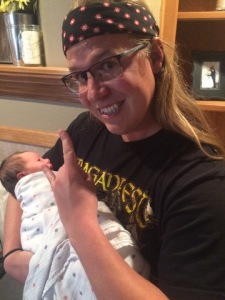 To the left is my niece, my youngest brother’s firstborn child, a sweet child of pure innocence and constant wonder, with blue eyes of thoughtfulness and jovial chubby cheeks. She’s less than a week old – I won’t see her again until I return to the States in August. Knowing this, what kind of uncle would I be if I didn’t make the trip to see her before leaving? That would be incredibly selfish of me, I thought, so I saddled up and headed over to beautiful Albuquerque – if only for a few hours – to see her and the proud parents afore my departure.

In addition to visiting family before leaving, there were a few items I needed to pick up to finish my packing list. Knowing there’s plenty of hiking retailer outfits in Albuquerque, I slew two birds with a single stone. Subsequently, I booked it to REI and acquired for myself the remainder of my items: a pack cover (my old one being too large), some dedicated hiking socks (my old Army ones are heavy and don’t dry swiftly), and a toiletry bag (more durable and compact than my previous one). Once I return home, it’ll be time to assemble my entire packing list and get the final weight – 16 pounds is the highest I’ll allow myself to go.

And so I do believe I am just about ready for this next adventure. Armed with a blogging device, I hope to maintain contact with the outside world. A camera is due to arrive in the mail soon enough so expect some terribly shoddy, but meaningful, pictures to be posted on the reg.

I hope to keep this thing as a good resource for any other potential hikers of the Chemin St. Jacques/Camino Norte so expect some rather serious – yet fun – posts about Do’s and Do Not’s along the Way.

And so, farewell for today, dear Albuquerque; I look forward to our next reunion in several months.

There are two things I think I love far more than anything else I’ve encountered on this globe: travel and writing. And that’s what the purpose of this blog serves – to document and comment upon my travels for the next few months.

My mother once described me (in front of her class, no less) as impetuous, brash, and off-color. She certainly isn’t wrong in that regard for this journey to Europe and South America was planned and purchased in less than a fortnight with little regard given to logistics, the effects of my absence from home, or any other thought really. I tend to follow my heart, and if I wish to do something, by Jove I’ll do it.

Which brings us here, to Brunomad, and the ensuing adventures we’re to have together as I traverse Europe to once again visit that holy city of Santiago de Compostella. Ah, yes, glorious Camino.

After a brief rendezvous in Illinois to attend the Gathering of Pilgrims, I will sojourn to Dublin, Ireland to make my offerings to the patron saint of Ireland, Lord Guinness. In a convenient stroke of luck, some bloke decided to put the cathedral to Saint James right across the street from the Guinness brewery! After making my devotions along the Wicklow Way, it’s a short ferry ride over to my beloved France where, gods willing, I will reunite with some old comrades, walk her beautiful coastline, and embrace life the way man was meant to: by living it.

Following this, I’ll walk the Camino del Norte route to Santiago, get my credencial, then book it to Muxia (Finisterra is highly overrated) before catching a bus to Lisbon and flying to Miami. In Miami, I’ll rendezvous with my FOCUS group before completing my mission trip in Santiago de Chile for several weeks.

And after that, sheesh, I will get over to Cancun, Mexico for my sister’s long-awaited wedding. Gods willing, I will get to visit Cuba too – big plans, big plans.

And the entire time? Why, I hope to be documenting the sights, the people, the emotions, the whole shebang along the Way.

If this sounds like your mug of mead, then follow along as this digital nomad tackles the world once more.