My digits are now tipped in these rather strange talons most people call fingernails as mine have been bitten off for some 30 odd years e’er since tooth discovered keratin. I find it strange – it makes typing far more haphazardous – and I’ve lost the oral fixation Freud hurr-hurred on about for psychopaths and Oedipusians.

After walking Camino for a third time, it seems the habit was left behind like a stone of ill-intentions at the Cruz de Ferro.

And after walking Camino, I find myself once more having that “Come to Jesus” moment about what is reality and where am I going with it.

School has been in full swing now for three weeks; week four starts in approximately six hours but I can’t be bothered with sleep and bullshit when I’ve got the proverbial war on my incessant and ceaseless mind. At least my new fingernails look rather fetching against the backdrop of my ink-stained knucklebones. 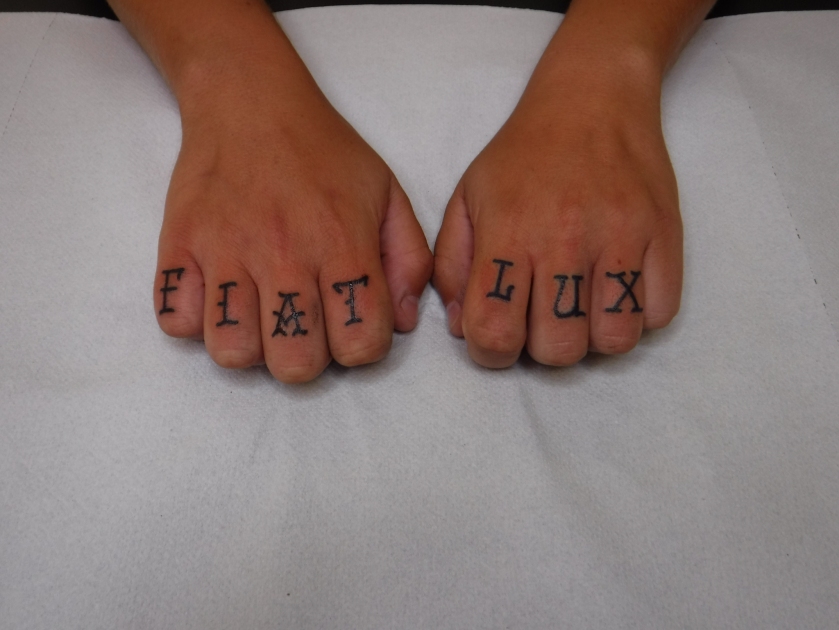 Lana released a new album on Friday the last: you think I’ve time to ponder anything other than this poet’s words?

That woman, that fucking woman, sweet tap dancin’ Christ she still gets to me. It’s been a proper spell since I pondered her every word and memory, but I still cannot escape the simple fact that I can’t deal.

I can’t deal with the fact I’ve essentially been promoted to teach three upper level courses after only two and a half years in the sack. That’s a vote of confidence in someone who constantly questions everything – especially himself – and I’ve yet to wrap my egotistical mind around it. I’m new. I’m fresh. I’m a virgin dying to have his first fuck but unready and unwilling for the floodgates to be opened just yet.

I can’t deal with the fact I serve as a father figure to students. Young people – especially males and those kids from broken homes – look up to me as a guiding light. Me, a goddamned mess with loose morals and a looser tongue. Christ, what did Bukowski say about his fame? “Can’t these people see that I am nothing?” Can’t they see that I too am nothing, that I’m just another egotistical pseudo-intellectual with his head in the clouds and totally detached from reality?

I can’t deal with the fact that a month ago I was wandering about Spain without a single care in the world, that I was sailing to Morocco on a whim, that I was getting my knuckles tattooed with a philosophical phrase, only to end up back exactly where I had left off. Like nothing had happened. Like fucking nothing had happened. That the pictures and memories are just that: things to collect dust.

I can’t deal with the fact that people say I’m a good writer and they enjoy my work. That my words somehow inspire them to be something more, that my travels and insight allow them to grab Life by the balls for themselves and beat it into submission. I cannot understand that aspect of myself (for it is evident I am my own biggest critic, comrade).

I can’t deal with the fact that morons share my teaching space and impart bullshit and scarcely eek a living on their sparse lessons of knowledge. It upsets me that New Mexico is 51st out of 50 states when it comes to education; what am I fighting for if only a few others seem to give the proverbial shit?

I can’t deal with the fact students are brainwashed to care more about sports and athletics than learning how to read, think, and write critically. How so many of my charges are merely going through the motions in order to be eligible for sportsball. It hurts to know that education always gets the lip service, but never the attention, that the whore sports does in this state.

I can’t deal with the fact that ignorance is accepted – even encouraged – in this culture simply because someone’s feelings might get hurt or having an open-mind means surrendering to squabbling majority views or clamoring minority views.

I can’t deal with the fact that even after three Caminos, I’m still my own worst enemy.

What I can deal with, comrade, is Sun Tzu’s simple mantra: If you know the enemy and you know yourself, you need not fear the result of a hundred battles.

It hurts to love you, but I still love you.

Even on my worst days, when I feel like giving up and fucking off right back to Spain – to indulge myself on those sandy beaches and smoke-filled bars – I still know who I am. It doesn’t have to be pretty, but, hell, no one e’er said I was pretty. Someone has to shovel the shit lest we all succumb to its miasma.

“I love my job,” I told her in true confidence. I love teaching – this is my calling.

Sure, I can’t deal with a great many things – I’m only human – but I’ll do my best to ensure my charges are better prepared for the realities of the world than I e’er was. I’m immature, irresponsible, a chain-smokin’, hard drinkin’, right proper bastard, but, comrades, at the end of the day, I know who I am.

“You’re forever afraid of love,” she would later tell me.

Nonsense. I love me. Some days are tougher than others – as evidenced by the fluidity of this post – but you have to love yourself afore you can love others, love what you do, and love the world around you. Self-doubt is my water and confidence is my wine: I need both to survive.

Being alive is the most beautiful thing any of us has accomplished, and I intend to make Life realize this isn’t a one-way street. I’m not great at it – she knows that – but no one said I was good (or timely) at this. It’s a process.

One thought on “I Can’t Deal”