Here’s where I make a typical excuse about how I’m pressed for time due to being a tired teacher with no recourse from grading an e’er growing mound of papers and spending all my free hours volunteering about the school. How difficult it is, then, to be a poor, beleaguered teacher beset on all side by obligations. 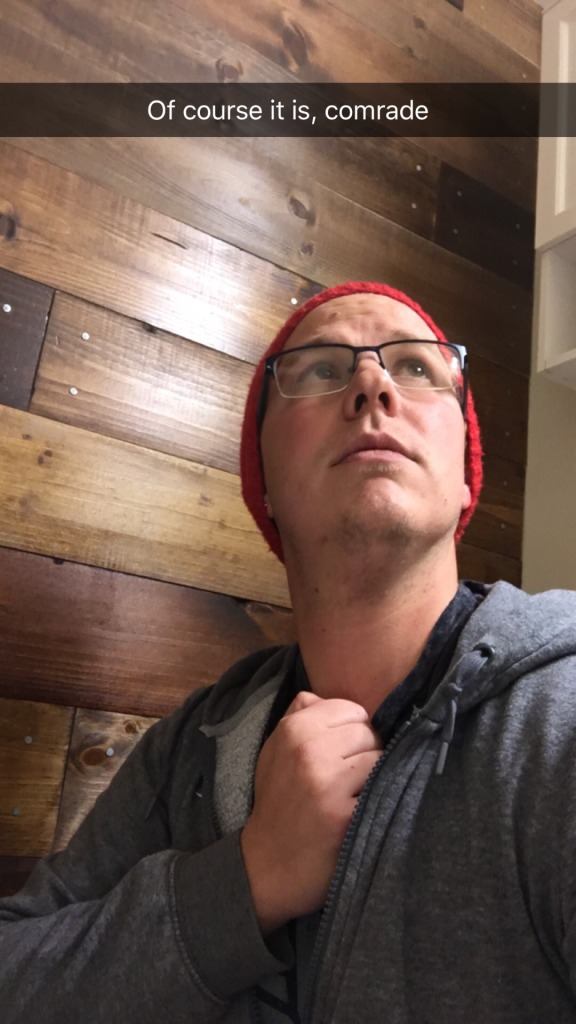 Hot damn; I love my job.

Yesterday (at the time of this writing), the family assembled on the Compound (for my parents seem to be building their very own Branch Davidian temple) to create approximately 500 pounds of sausage. If you’re going to round off your Thanksgiving break with something memorable, might as well make it edible too. After working the pusher and turning that damned crank the better part of 10 hours, I must say, I am still absolutely knackered and sore. Is this what getting old is like?

Today, dragging ass and with little patience for unenthusiastic kids – forsooth, the day back from break is a bit of a tizzy – I set upon my charges another Herculean task: poetry projects!

To date, we, as a class, have examined numerous poems in detail: Richard Cory and The Trouble with Poetry have been my favorites because they are both deep, philosophical, and relatable to errant high schoolers. Class discussions have been insightful (from the mouth of babes, after all) and engaging.

Come Wednesday, my charges are responsible for copying and discussing Enemies by Wendell Berry, a poem I had overlooked when planning what sort of mischief to turn my charges upon. Shame on me for ignoring such a piece. Yet it was one of my students – a quiet boy who typically engages me in after-school philosophical questioning – that warranted my change of heart.

He had selected Enemies as the basis for his next poetry project (a brief 5-minute presentation to his peers) and stopped by my classroom to seek advice on the subject. Me, being the professional bullshitter I am, bid him enter. I then watched as he wrote the entire poem on the board, then proceeded to flay the proverbial flesh from the bones of the poem, tearing into it as lightning pierces the veil of night with a thunderous clap. I sat in innocent wonder as he counted the sentences, mumbled comments about the punctuation (and yes, the semicolon is sexy), looked for imagery, repetition, alliteration, allusion, and more in these 15 lines, all the while making notes on the board, wringing his hands, and periodically asking my opinion on his findings.

The board was littered in dissected stanzas, disemboweled phrases and words, the last of the eviscerated imagery and numerology gasping for breath from his relentless, poetic onslaught.

In short, the little fucker took a poem I had merely glanced at in passing and he turned it into something beautiful. Me, an amateur, taking lessons from this young man.

“What’s your monster, Mr. Hipster,” he finally asked me (his bloodlust satiated) referencing the allusion to monsters and inner demons Berry mentioned oft in Enemies.

“I like to torture myself,” I responded without hesitation.

Lana Del Rey’s Love had been on repeat for about an hour and I explained my interpretation and the significance of the song to him as he periodically returned to the board to write a fleeting thought here and there.

To be in love with someone – to find that common ground – then to turn away from one another so suddenly but never letting go of that thread; a thread which becomes a barbed wire in your hand; the slightest tug in either direction cutting deeply, opening fresh wounds and older scars.

“Arrogance,” I finally added after having described my failed love life and how that goaded me toward a Life of self-centeredness and hedonism. “I am a very proud person, even if I fail to admit it regularly.” More than once this weekend – especially whilst making sausage with the family – I was reminded of my shortcomings in the hubris and pride department. Here I thought my cardinal sin was once Wrath, then Lust, now Pride.

Why’d it have to be Pride?

Berry writes that we all stand a good chance of becoming a monster in response to our own antagonists; my student compared this stanza to bullies and their impact upon his friends and himself. Let’s be real: a student who seeks after-school advice and poetry talk is a prime target for ignoramuses. For me, my arrogance is born from being a runt who was always out to prove himself in one failed relationship after another and a lifetime of Can’t’s and You Won’t’s.

It took a young man and a random poem for the implications of my own shortcomings to really hit home.

It was extraordinarily beautiful and humbling, comrades, to watch my student work without the classroom distractions. A young man, a poem, and a slurry of emotions and insight strewn across my whiteboard for all to see and take heed; he did me a solid, really, by opening my eyes a bit further to the beauty found within words.

“No,” he shook his mop-covered head. “Not really.” I sighed. “But I like learning about things,” he added as he marked up the poem yet again.

This young man, along with a score of others, keep this proud soul humbled, and more importantly, going.

2 thoughts on “Lest You Become a Monster Yourself”