Yes, it’s true, your erstwhile wanderer has made it to the fabulous city of Burgos, somewhat officially marking the beginning of the Mesata on Camino. I had originally planned to walk on through this bloated industrial habitation, but upon glimpsing the cathedral spires through the trees, I was compelled to stop for the day. And lawdy am I glad I did.

If Burgos tickles your fancy, then by all means, comrade, read on.

The day began in Atapuerca, just shy of 20km from Burgos proper. I had originally planned to go about 30km this day, passing through Burgos with little more than a nod and perhaps a photo or two. The last time I ventured through the area, we were completely knackered and not very fond of the big city, hordes of tourists, and ubiquitous pilgrims. I reasoned today, two years later, would be similar and decided early on to pay my respects to El Cid and the cathedral before continuing onward.

But Fate always has another plan for me.

The climb from Atapuerca takes you up a small, rocky hill with grazing sheep on one side and yards of military-grade barbed wire on the other. I was awoken at 5:45AM or so because my roommates are far more tenacious than I in the wee hours of the morn; I began walking by 6AM. If you’re awake, hell, might as well get crackin’.

As I ascended the hill, I recalled what lay at the top for me: an old cross with a pile of stones and a handmade labyrinth. I cannot rightfully explain the feeling just yet, but I found myself eager to get to the crest and spend some time amongst those old stones. It was the pull of the labyrinth, really.

Before I had left the States, I had attended the American Pilgrims on the Camino (APOC) gathering back in April where a lecture was given on labyrinths and their many meanings. I was completely fascinated by this lecture and sought out the speaker afterward, picking her brain here and there about everything she knew and understood about these complex symbols. The desire to learn, comrades.

And here I was, walking once more unto the stone structure, yet now armed with a greater understanding and appreciation for what graced the hilltop. As I sat there in contemplative silence, the lone pilgrim atop a misty scene of true serenity, I found myself completely at peace. With little more than silent stones for company, the beat of my heart acting as cadence, the rising sun creating the most splendid pink shroud about the area, yes, it was peace.

With reticence, I pushed onward to the first village, leaving behind the lovely atmosphere I had crafted for myself – the Way kept going and I with it. As I sat drinking my cafe, familiar faces began to wander in and we each shared our personal moment atop that brilliant hill. For many, it was a perfect opportunity for self-reflection, to realize just how far they had come on their Camino. For others, it was simply beautiful in its natural state; a photo worthy of taking. As they say, everyone walks their own Camino. The hilltop labyrinth of Atapuerca is a fine example.

The remainder of the walk to Burgos was punctuated by the occasional village and then a good 10km stretch of forested riverside ambling. I didn’t see many pilgrims today (apart from real-life Ned Flanders) and I think that’s what my soul needed – to be alone with my thoughts from the morning. To digest in solitude the emotional majesty of that early morning imagery: the pink soul of the sky coming to Life, the simplicity of the stone labyrinth, the solo cross atop a lonely crest. Such beauty, such emotion, in such simple things. It was a true Camino moment.

And as I walked throughout the forested path, I glimpsed church spires long in the distance, and there I decided to rest for the day. Burgos it would be then. I arrived early enough to secure comfortable lodgings, get myself cleaned up, and even tour the cathedral. My day began in natural beauty; it ended with man’s.

The cathedral is an impressive building, soaring high into the blue sky, almost alabaster in color, and decorated with extreme care and detail. I have seen a good many of man’s triumph throughout the world, but I firmly believe structures of stone and wood are far more beautiful and endearing than those of steel. The men who started construction of these magnificent pieces would not live to see their conclusion, yet they achieved immortality when their mortal shell could not. It’s poetically, tragically beautiful.

And I broke my rule about houses of worship and photographs: 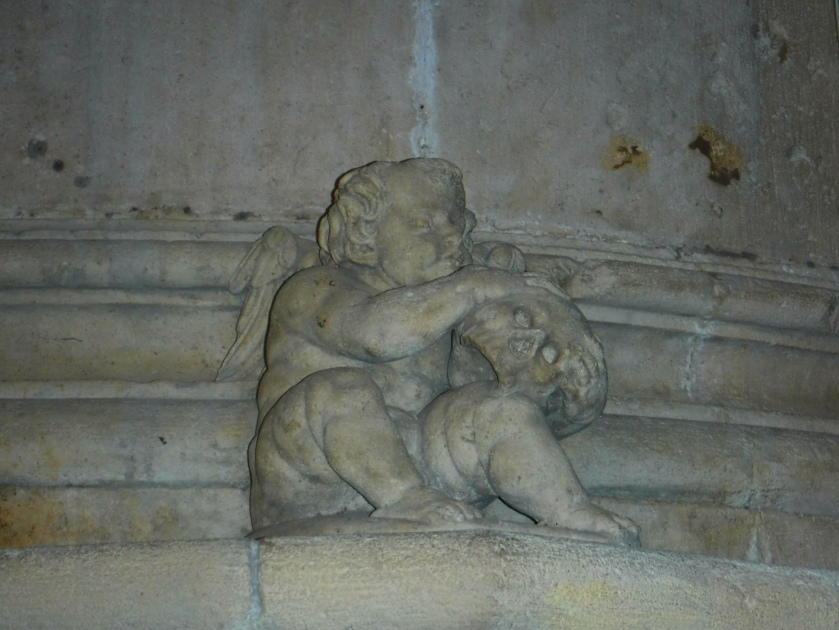 In all the magnificence of this church, the cherubim holding the skull was the most compelling thing I had witnessed and I was obliged to snap his likeness. It’s beautiful, this simple sculpture in a veritable tomb of magnificence. The simple things, folks.

Armed with a beer and morcilla de Burgos, yes, it has been a good day. And thus concludes Burgos. For now.